View products
Named after the ancient body of trees that is Sherwood Forest, our Sherwood collection draws on both the natural landscape of the forest itself, but also its heritage and history, its famous myths and legend. Nestled near the border of Derbyshire on Nottinghamshire's western flank, the forest is located within the deepest and darkest heart of England. And as such, one may not be surprised to note that it contains some of the oldest trees in the land. 1000-year-old oaks stretch their green moss-laden branches over and under each other, crisscrossing the canopy above those who are lucky enough to grace the forest floor below. But Sherwood forest is not just known for its outstanding flora and fauna. Of course, it is the legend of Robin Hood that mainly draws the crowds of 350,000 tourists to its boundaries. An ancient hunting ground for the deer. The forest itself is a royal forest, and was an ancient hunting ground of the monarch. As such it would have been subject to the same laws as other royal forests that prohibited the hunting of any deer and boar that lay within it. Such privations for the local population of their much-needed food supply provides the backdrop for the legend whose one version or other we know so well. Robin hood was a renegade and a bandit that lay within this mystical forest, part soldier, part hunter, part social revolutionary bushwhacker, and who struck out against these oppressive laws. Like a more rebellious and anti-establishment Bear Grylls, he was an outlier, a wanderer and a leader amongst men. It is the essence of both this legend and also the forest itself that we have sought to encapsulate within our Sherwood collection.

Our Sherwood collection is for the young and active. The lightweight backpacks and waist bag are in the style of an urban military camouflage with all the characteristics of genuine MOLLE military equipment. Lightweight, water-repellent fabric with universal camouflage print in navy blue color tones, they are for urban "travelers" and "hunters" keen on exploring new routes, on skateboards, bicycles or on foot. It is a range for those who do not want to betray their strong spirit in the city bustle, it is for the winners and the intrepid. Each of the bags is not weighted down with superfluous details but comes with only the most necessary of elements.
+ 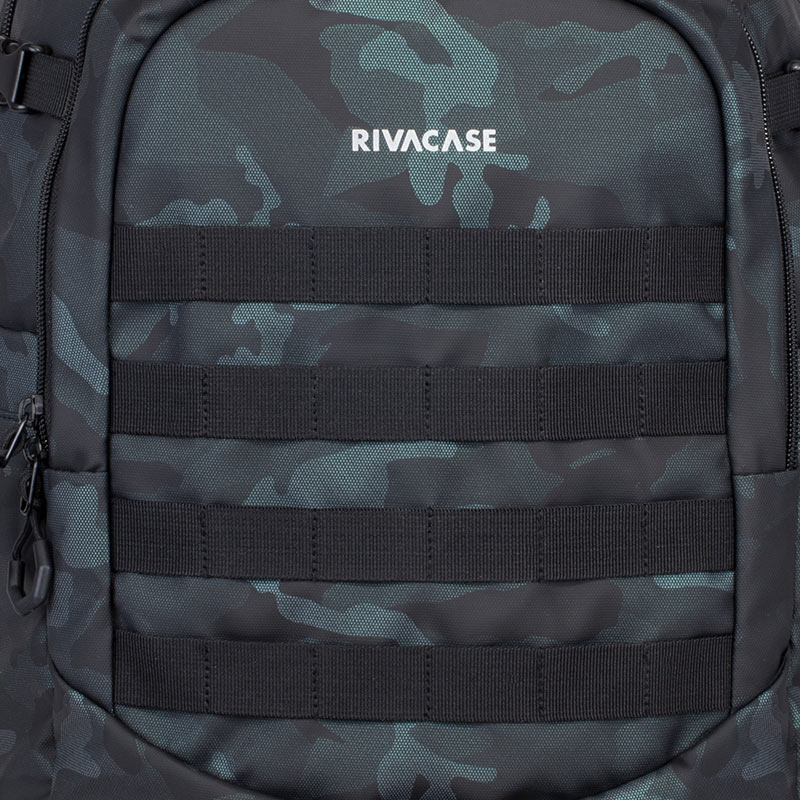 Military-style with MOLLE-webbing elements of design

This range comes with its own military style with MOLLE-webbing elements of design. What does this mean? MOLLE is the acronym used by military organizations for 'modular lightweight load-carrying equipment' - a kind of generation of load-bearing equipment that relies on heavy duty nylon stitched to allow the addition of other pouches and accessories. With this range, this element creates a militaristic and adventurous feel, as well as military-level functionality, that will be sure to both motivate you on your day and impress those that you come into contact with. Obviously, this aspect is only accentuated by the camouflage material used across the range.

It is absolutely crucial these days to ensure that your bag's contents remain dry and protected at all times. We all carry around with us electronic devices that are still too susceptible to moisture to take any chances with at all. That is why we have made sure that this collection comes with its own PU lamination - a thin layer of a polyurethane film which acts as a formidable water barrier. This means that you can go about on your day and remain safe in the knowledge that your devices will remain free from harm and remain safe within your bag come rain or shine. So no worries if you get caught out in a shower, simply continue on your journey with confidence.

There is nothing worse than scrabbling around in the bottom of your bag looking for that troublesome pair of house or car keys. This process is made all the more tricky when in a rush and when the weather is poor. That is why we have made sure to include a detachable key strap with this bag so that you know where your keys are at all times of the day and are never left stranded outside in the elements. Simply clip your key onto the strap and pop it away in its pouch and give yourself that extra security of mind that comes from knowing you are completely prepared for the day ahead.
+ 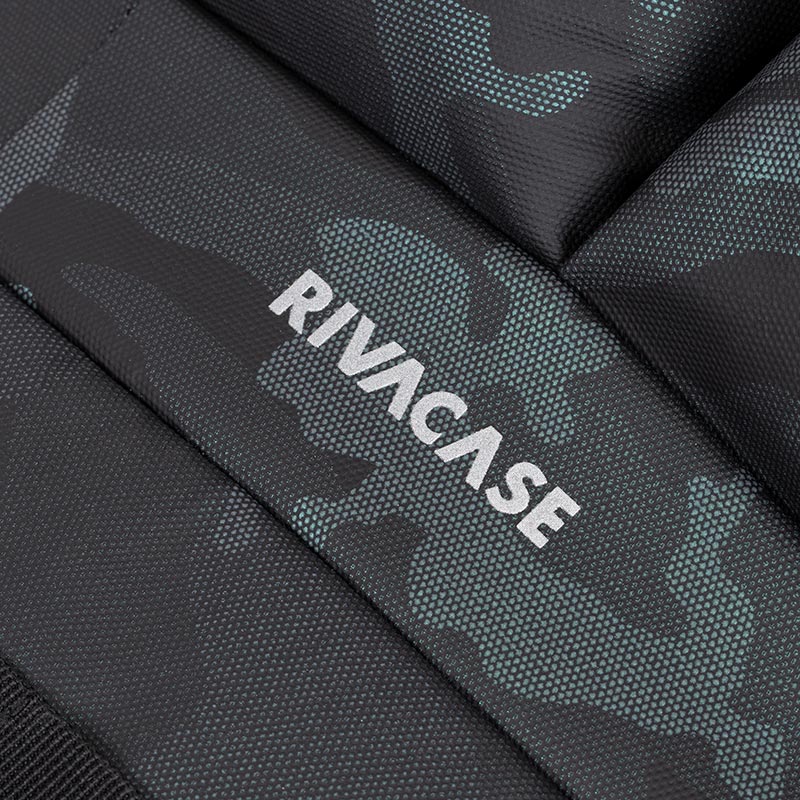 We at RIVACASE take enormous pride in the products we create. From the moment an idea is conceived in a management meeting, till the moment that it is delivered to you, we have taken the time to ensure at absolutely every stage we have focused on producing a quality product. That is why we are happy to brand our products, and in this case brand them with a conspicuous light-reflective RIVACASE logo, because we know that they are built to stand the test of time. You too, when seen using them, will be recognized as someone who above all values functionality and adaptability.

There is nothing worse than bags that are created with flimsy and cheaply made or poorly designed zipper pulls. They are bound to let you down at a time when you least expect it and need it least. It normally happens on an airport concourse or railway platform when late for a plane or train. This bag helps you circumvent any such eventuality by including dual zipper pulls that are sturdy and well designed with their own specially shaped caps so that you can be robust with your bag without fear of damaging it. The dual nature of them also provides easier access and puts less pressure on the zip and puller than any single zipped bag.
+ 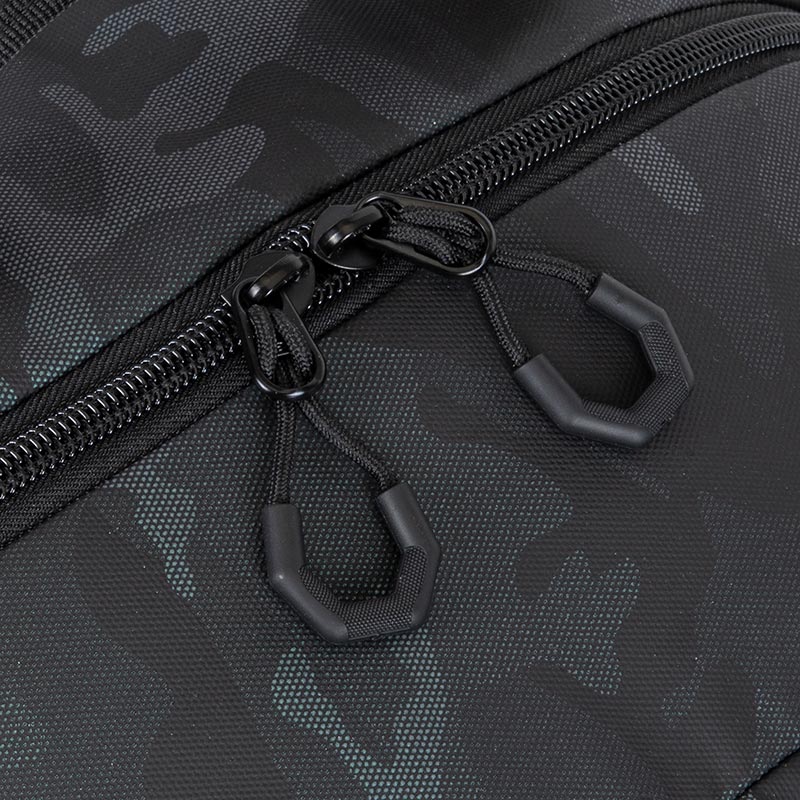 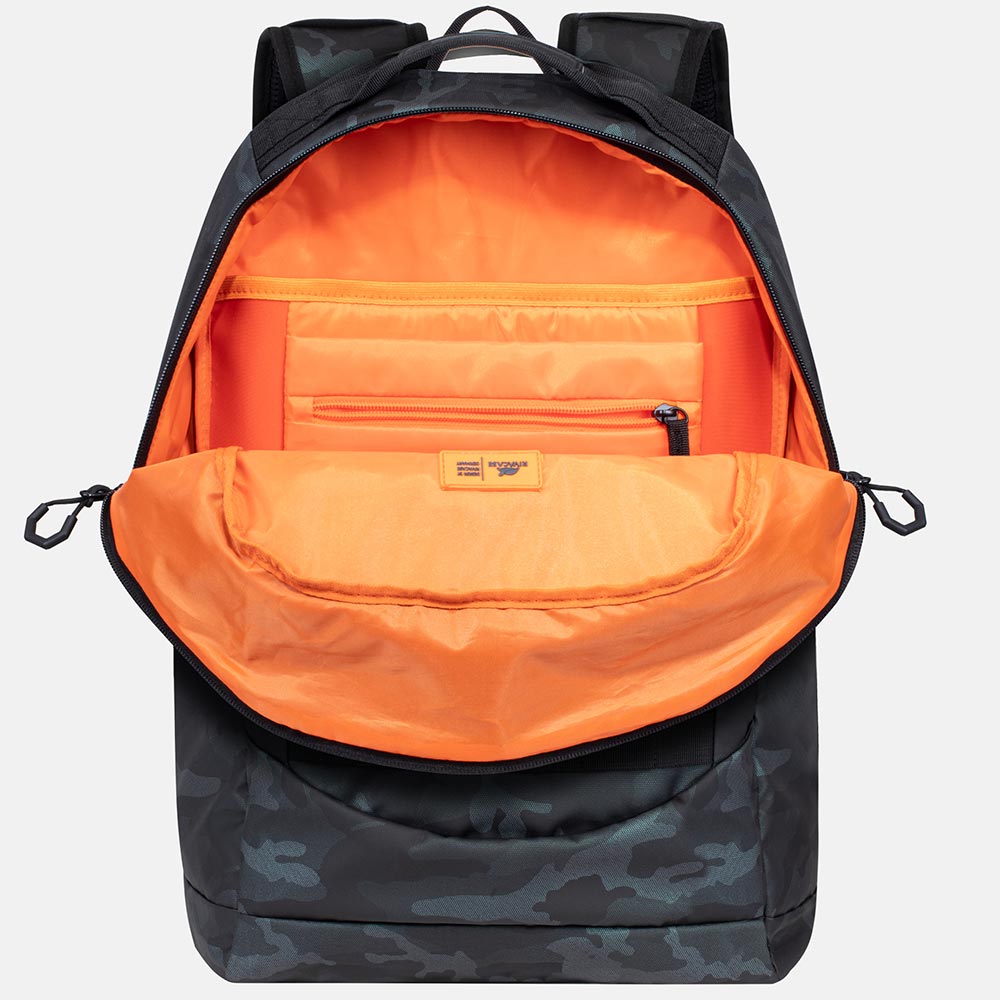 The lining of this bag is one of its most striking elements. A shocking orange color will not only create an impression on those around you but will also make it eminently easier to locate all your gear. Even the most organized of travelers, will at times not be able to recall immediately where all their items are. And despite this bag being incredibly functional and being designed from start to finish with ergonomics firmly in mind, users of any bag may at times misplace their items. This contrasting interior will help make sure that when this happens you can easily grab whatever it is that you need and be on your way.

This Sherwood waist sling bag is the perfect option for mobile devices. The military-style waist bag with MOLLE-webbing elements of design is manufactured out of durable water-resistant material with PU lamination so that no matter if you get caught in a shower your items will remain dry and protected. The main compartment has an additional inner zipped pocket for passport, wallet and removable carabiner for keys so that your most crucial of items are kept safe and secure. A hidden back zipped pocket is the perfect spot to slot in your smartphone away from prying eyes. And an adjustable waist belt will ensure you get just the right fit. 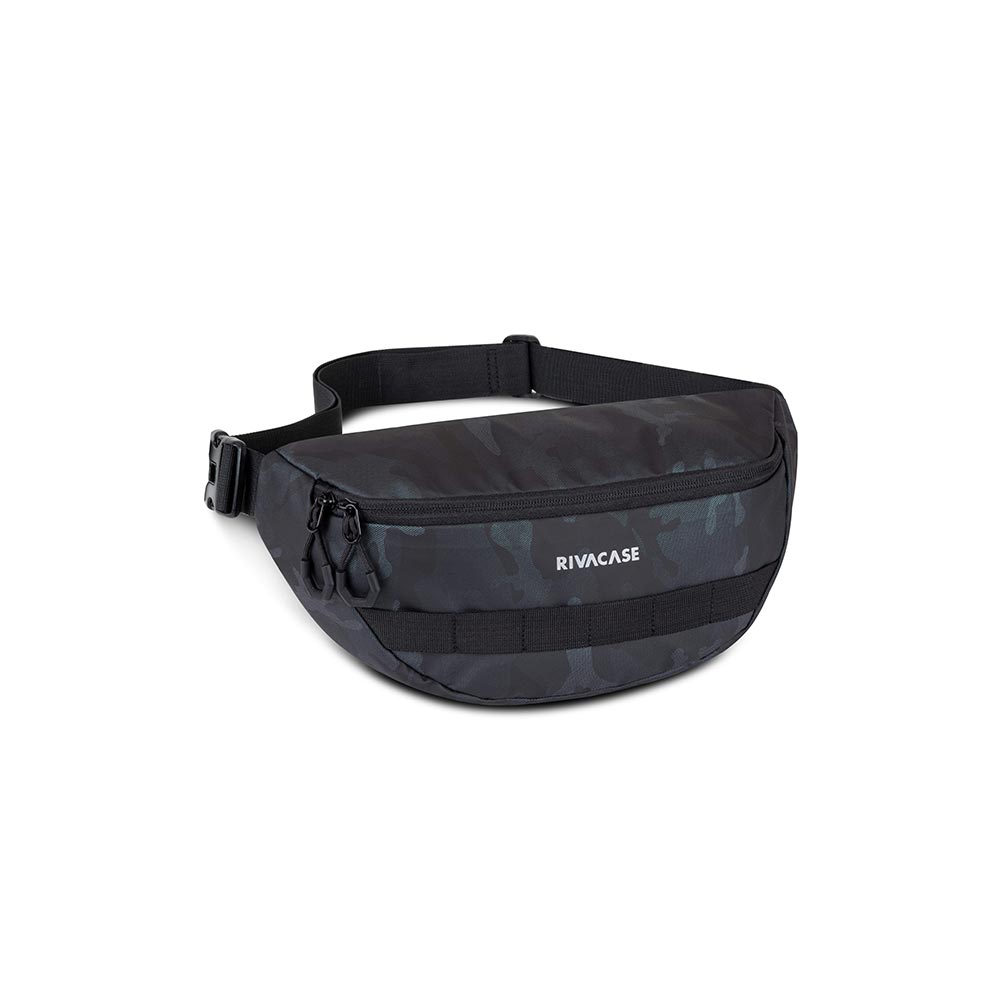 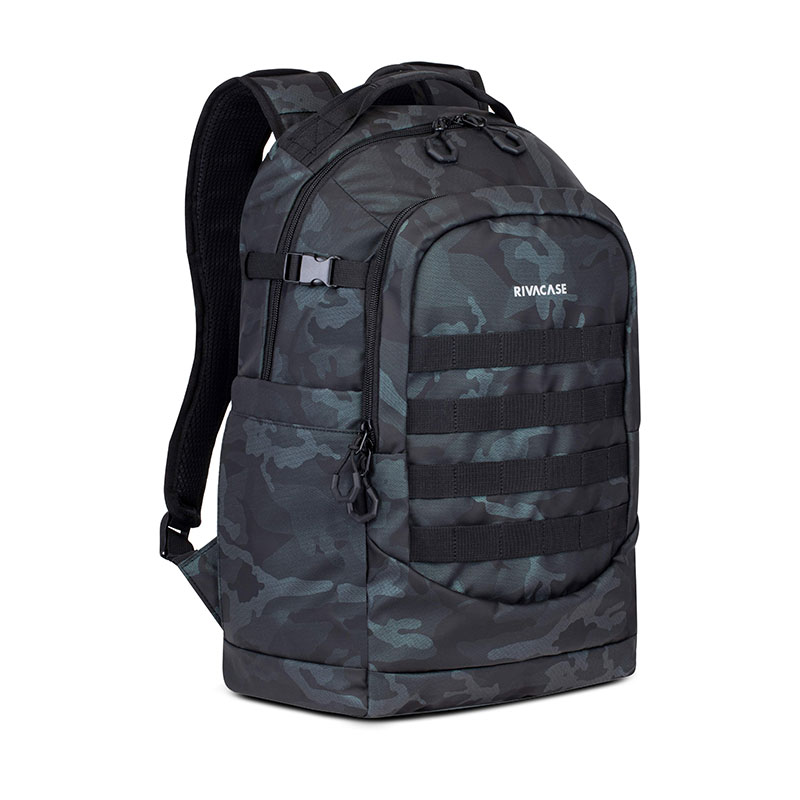 This slightly smaller 28 L military-style rucksack with MOLLE-webbing elements of design is manufactured from durable water-resistant material with PU lamination so that your items are kept free from moisture damage at all times. The interior is made of contrasting orange lining and the exterior contains MOLLE-webbing so that you can attach an additional pouch or outdoor gear. The rucksack has a spacious storage compartment for daily clothes for short trips as well as an inner compartment for a 15.6” laptop, documents, accessories and section for tablet up to 10.5". Front zipped compartments for a smartphone, business cards, accessories and removable carabiner for keys are also included. A comfortable soft handle, shoulder straps with softened bands and an integrated rescue whistle into a sternum strap will keep you at ease on your journey ahead. The trolley strap will allow you to easily attach the rucksack to any rolling luggage. Side pockets permit you to slide in that invaluable water bottle. And a side strap system allows for internal compression to make you as compact as possible. Finally, a hidden pocket on the back of the rucksack is provided for a passport or wallet.

This 32 L military-style rucksack with MOLLE-webbing elements of design is manufactured of durable water-resistant material with PU lamination to keep your items extra safe. The interior is made of contrasting orange lining and the exterior from MOLLE-webbing so that you can attach an additional pouch or outdoor gear. The rucksack has a spacious storage compartment for daily clothes for short trips along with inner compartments for a 17.3” laptop, documents, accessories and a section for a tablet up to 10.5". Two front zipped pockets for a smartphone, business cards, accessories and a removable carabiner for keys will keep your valuables safe and a comfortable soft handle, shoulder straps with softened bands and an integrated rescue whistle/sternum strap, will allow you to go about your day with ease. A trolley strap easily attaches the rucksack to any rolling luggage. Nifty side pockets mean you can slip in that crucial bottle of water. A side strap system for internal compression will help maintain your compactness and a hidden pocket on the back of the rucksack for a passport or wallet will give you that extra necessary level of security.